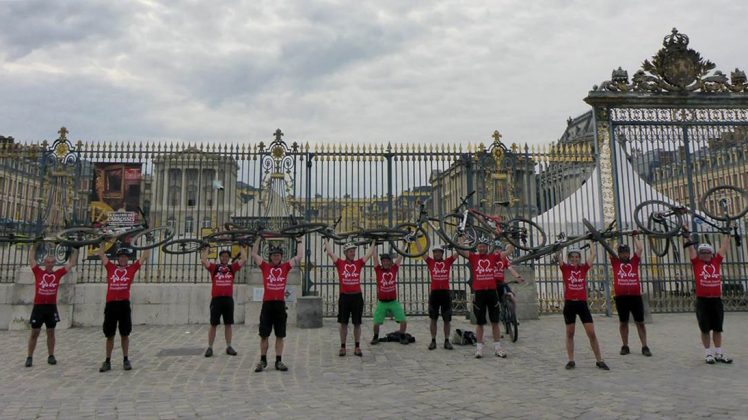 An inspiring team of bike enthusiasts have cycled from London to Paris in only three days and raised almost £6,000 for British Heart Foundation.

The team of 12 riders from Space Engineering Services began their second attempt at the challenge on 17th September, after the original event in June was cancelled by the organisers, British Heart Foundation, due to flooding which had affected part of the route in Northern France.

Brian Sealy, Mike York, April Collins, Dave Foreshew, Craig Evans, Tony Mills, Andy Sealy, Paul Hallett, Keith Harris, Dale Nouch, Lee Saxon and Greg Cottrill peddled their way from the British capital, through the Surrey countryside climbing up and over the South Downs, then from Dieppe to Lyons-la-Forêt in Normandy before arriving at the Palace of Versailles in Paris.

Totalling a distance of 300 km, their route was entirely off-road making it a real test of their skills as they encountered steep climbs and fast descents along tracks, paths, and trails between 17th and 19th September.

Backed by the support team manned by Phil Johal our Commissioning and Technical Manager, and Max Huntley, Pack Build Engineer, the team had Paris clearly in their sights, reaching speeds of 30 mph and covering distances of over 100 km in a single day.

But like all challenges where time is of the essence and reaching the next mile stone means the difference between a hearty meal in a French bistro or a baguette by the side of the road, disaster struck.

A crucial part of Brian’s bike failed whilst negotiating a farm track several miles from Dieppe. Thanks to a combination of skill, determination, and a real team work ethos, Tony and Dave managed to salvage Brian’s bike, but all of the gears except one were unrepairable. With countless metres of climbs and descents still to go, Greg stepped up to the challenge and rode the ailing, one-speed bike the remaining 100 miles to Paris – a huge feat in itself.

On the evening of day 3, the 12 riders successfully crossed the finishing line at the Palace of Versailles. Three consecutive days of disciplined, mixed terrain cycling were finally over, and as the team triumphantly hailed their bicycles in the air, they beamed with pride reflecting on their amazing journey.

A tremendous well done to the whole team for completing this incredible challenge. The team would like to say a huge thank you to Phil and Max the support vehicle drivers for supporting the team throughout the journey, and to Space Engineering Services’ Directors for all their help and support.

The team would like also to express their immense gratitude to everyone who sponsored them with their generous donations. The event has raised £5,610.00 so far, and all funds raised will go to British Heart Foundation to enable them to continue their life-saving research.

What an incredible achievement, and who knows what brilliant adventures these thrill-seekers will plan for 2017……watch this space!