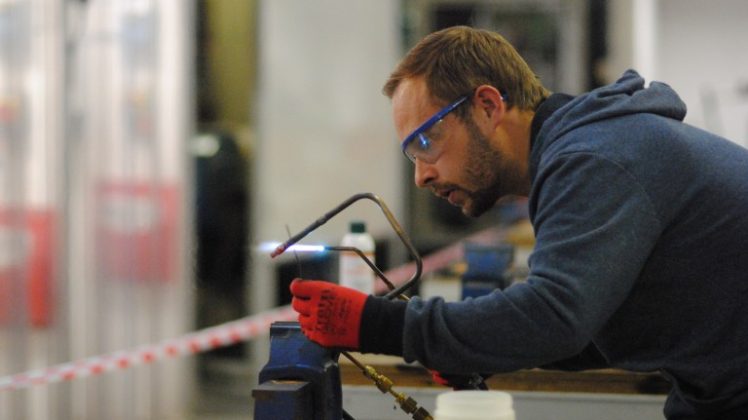 Competing in this week’s national SkillFRIDGE final at the Skills Show in Birmingham is our aspiring Service Engineer, Adam Jackson.

Currently a Maintenance Engineer supporting one of our retail customers, Adam recently began his second year of the NVQ Level 2 Refrigeration and Air Conditioning at Bath College, supported by Space Engineering Services.

Adam fought off hot competition at July’s SkillFRIDGE regional heat in Bath to secure his place in the finals. SkillFRIDGE is a dedicated competition which aims to increase skill levels across the refrigeration and air conditioning industry.

Joining the business in 2007, Adam was part of the Case Maintenance team for seven years before beginning his studies and his current role in the Service and Compliance team.

In July, Adam followed a detailed specification to complete three tasks in front of a panel of judges alongside competitors, where his knowledge and practical skills in brazing, interpreting schematics, wiring and much more were put to the test. His efforts scored amongst the top six across from the three regional heats, and he is now preparing for the final, which forms part of the Skills Show.

Reflecting on his performance in the competition Adam says: “It’s been a great experience taking part in the competition. Although it’s taken me out of my comfort zone, it’s shown me just how much I can achieve with perseverance and determination”.

The Skills Show, taking place at the Birmingham NEC from 17th to 19th November, is an annual event which showcases the brightest young talent in engineering and technology among other areas. Some 80,000 visitors are expected this year, making it the nation’s largest skills and careers event.

Adam will compete against other Refrigeration and Air Conditioning NVQ Level 2 students later this week alongside competitors from colleges across the UK. If you’re attending the show, why not drop by and show your support!

From everyone at Space Engineering Services; well done Adam for your hard work in reaching this stage in the competition, we know you’ll do us proud at the finals! We wish you every success!